Corporate Bodies Have No Soul

William Hazlitt (1778 – 1830) was an English essayist, writer, and social commentator. He is considered one of the greatest masters of the English language, but despite his very high standing among historians of literature and art, his work is currently little read. However, the following poignant sentences of this brilliant polemicist and critic of pomp and power are resonant now as they were 200 years ago.

“Corporate bodies have no soul. Corporate bodies are more corrupt and profligate than individuals, because they have more power to do mischief, and are less amenable to disgrace or punishment. They feel neither shame, remorse, gratitude, nor goodwill. [In corporate bodies] the principle of private or natural conscience is extinguished in each individual (we have no moral sense in the breasts of others), and nothing is considered but how the united efforts of the whole (released from idle scruples) may be best directed to the obtaining of political advantages and privileges to be shared as common spoil. […]
The refinements of private judgment are referred to and negatived in a committee of the whole body, while the projects and interests of the Corporation meet with a secret but powerful support in the self-love of the different members. Remonstrance, opposition, is fruitless, troublesome, invidious; it answers no one end; and a conformity to the sense of the company is found to be no less necessary to a reputation for good-fellowship than to a quiet life. Self-love and social here look like the same; and in consulting the interests of a particular class, which are also your own, there is even a show of public virtue. […] In the meantime they eat, drink, and carouse together. They wash down all minor animosities and unavoidable differences of opinion in pint bumpers; and the complaints of the multitude are lost in the clatter of plates and the roaring of loyal catches at every quarter’s meeting or mayor’s feast. The town-hall reels with an unwieldy sense of self-importance; ‘the very stones prate’ of processions; the common pump creaks in concert with the uncorking of bottles and tapping of beer-barrels: the market-cross looks big with authority. Everything has an ambiguous, upstart, repulsive air. Circle within circle is formed, an imperium in imperio: and the business is to exclude from the first circle all the notions, opinions, ideas, interests, and pretensions of the second. Hence there arises not only an antipathy to common sense and decency in those things where there is a real opposition of interest or clashing of prejudice, but it becomes a habit and a favourite amusement in those who are ‘dressed in a little brief authority,’ to thwart, annoy, insult, and harass others on all occasions where the least opportunity or pretext for it occurs. […] The individual is the creature of his feelings of all sorts, the sport of his vices and his virtues—like the fool in Shakespear, ‘motley’s his proper wear’:—corporate bodies are dressed in a moral uniform; mixed motives do not operate there, frailty is made into a system, ‘diseases are turned into commodities.'” 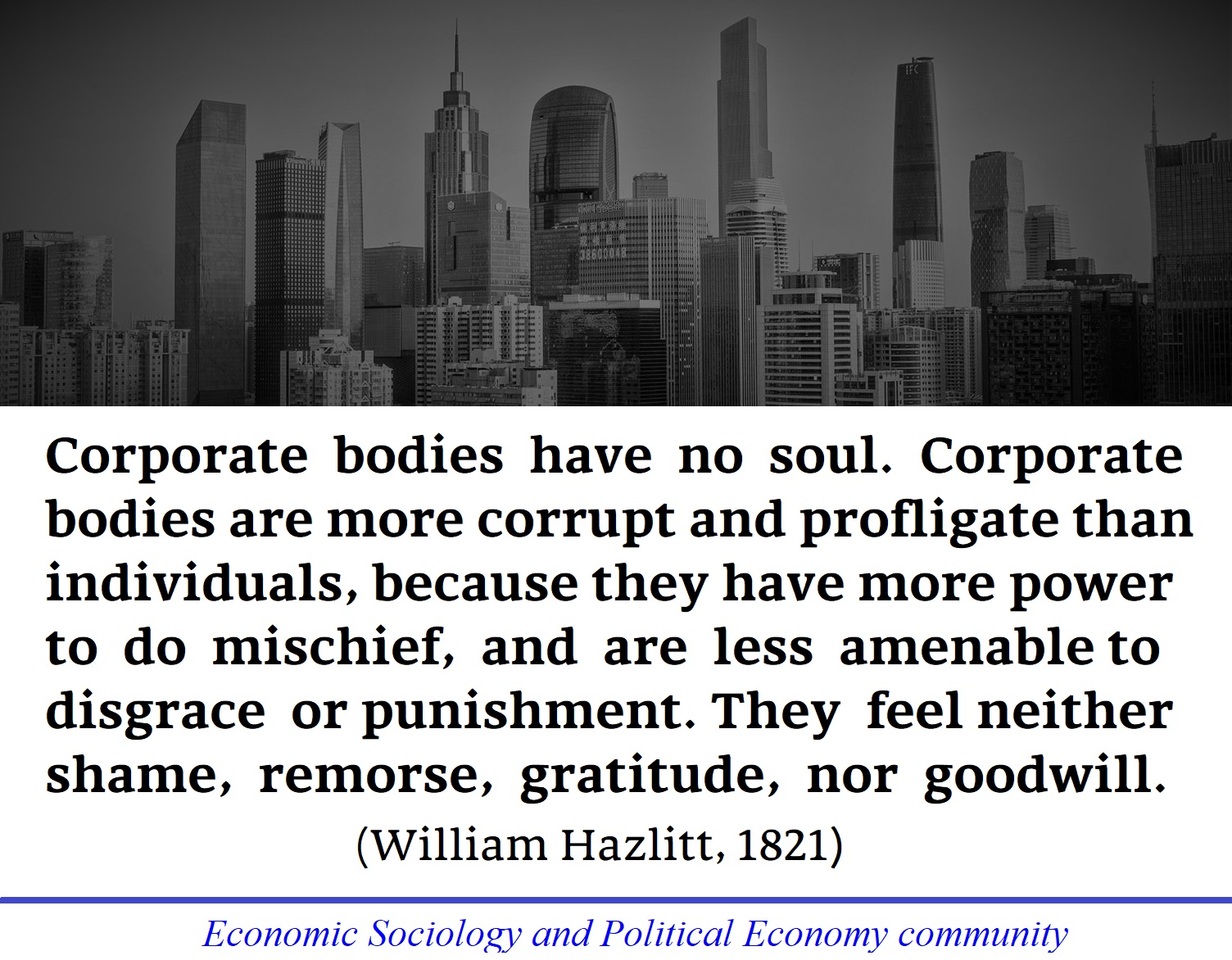