The Feature of an Intellectual

“The test of a first-rate intelligence is the ability to hold two opposed ideas in the mind at the same time, and still retain the ability to function. One should, for example, be able to see that things are hopeless and yet be determined to make them otherwise. This philosophy fitted on to my early adult life, when I saw the improbable, the implausible, often the “impossible,” come true. Life was something you dominated if you were any good. Life yielded easily to intelligence and effort, or to what proportion could be mustered of both. It seemed a romantic business to be a successful literary man—you were not ever going to be as famous as a movie star but what note you had was probably longer-lived; you were never going to have the power of a man of strong political or religious convictions but you were certainly more independent. Of course within the practice of your trade you were forever unsatisfied—but I, for one, would not have chosen any other.” (“The Crack-Up”, 1936) 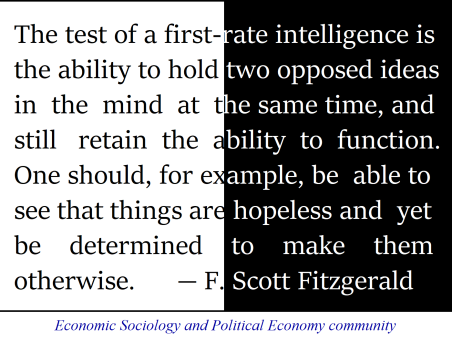 This entry was posted in Oleg Komlik and tagged academia, writing. Bookmark the permalink.