Politics & Society has just published a thought-provoking special issue titled “Democratizing Finance”. This interesting collection of papers resulted from a workshop organized in July 2018 by the late Erik Olin Wright as part of his inspiring Real Utopias Project.
This timely special issue starts with an introduction by Fred Block (read below its open-access version) in which he discusses what the theme “democratizing finance” means. The main use of the term “democratizing finance” in this issues focuses on reducing inequalities of income, wealth, and power, and it follows the general logic that Erik Olin Wright laid out in his books Envisioning Real Utopias (2010) and How to Be an Anticapitalist in the 21st Century (2019). While the contributors share a considerable agreement on why a democratization of the financial industry is an urgent political and social priority, they have some disagreements over the strategies to reach this essential goal.
The issue includes two anchor articles “Finance without Financiers” by Robert C. Hockett and “Financial Democratization and the Transition to Socialism” by Fred Block, and five in-depth commentaries “Economic Democracy and Enterprise Form in Finance” by William H. Simon, “Democratizing Investment” by Lenore Palladino, “Democratizing Finance or Democratizing Money?” by Mary Mellor, “To Democratize Finance, Democratize Central Banking” by David M. Woodruff and “The Politics of Democratizing Finance: A Radical View” by Michael A. McCarthy.
In the introductory essay, Fred Block writes: “Recent decades have demonstrated that finance can be an enormously destructive force as well as a powerful instrument of social reform… Our hope is that these articles help provoke further debate and discussion about the ways that the democratization of finance can be integrated into current political discourse” (p. 489). It seems to me this project definitely did a fine intellectual 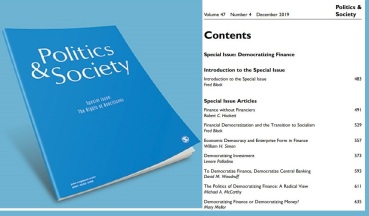 work to promote this goal.