Did Neoliberalism and Austerity Cause Brexit? Yes.

While the Brexit process is underway and UK politicians are tearing themselves apart over this overwhelmingly and multidimensionally complicated  issue, an economics professor from Warwick University Thiemo Fetzer provides ample and comprehensive evidence that the austerity-induced withdrawal of the welfare state brought about by the Conservative-led coalition government from late 2010 onwards are key to understanding how pressures to hold an EU referendum built up and why the Leave side won.
In his new research paper “Did Austerity Cause Brexit?” Fetzer convincingly shows and asserts that various welfare cuts and neoliberal reforms (such as the abolishment of council tax benefit, the so-called ‘bedroom-tax’, and the squeeze of disability living allowance) have been a strong driving factor behind the growing support for the populist Ukip party in the wake of the EU referendum, contributed to the development of broader anti-establishment preferences and are strongly associated with popular support for Brexit.
Read the abstract of this very interesting, important, well-researched and well-written paper, and find below its open-access link:

“This paper shows that the rise of popular support for the UK Independence Party (UKIP), as the single most important correlate of the subsequent Leave vote in the 2016 European Union (EU) referendum, along with broader measures of political dissatisfaction, are strongly and causally associated with an individual’s or an area’s exposure to austerity since 2010. In addition to exploiting data from the population of all electoral contests in the UK since 2000, I leverage detailed individual level panel data allowing me to exploit within-individual variation in exposure to specific rules-based welfare reforms as well as broader measures of political preferences. The results suggest that the EU referendum could have resulted in a Remain victory had it not been for a range of austerity-induced welfare reforms. These reforms activated existing economic grievances. Further, auxiliary results suggest that the underlying economic grievances have broader origins than what the current literature on Brexit suggests. Up until 2010, the UK’s welfare state evened out growing income differences across the skill divide through transfer payments. This pattern markedly stops from 2010 onwards as austerity started to bite.” 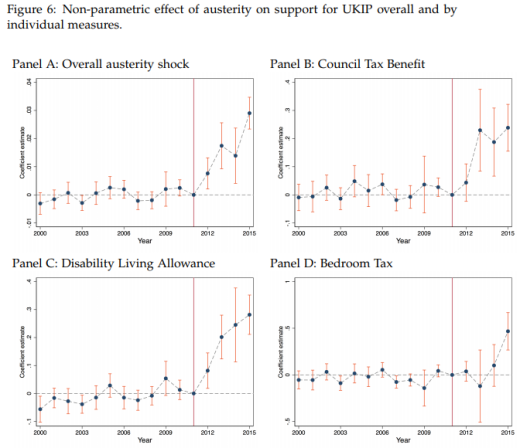 Fetzer, Thiemo. 2018. “Did Austerity Cause Brexit?” Centre for Competitive Advantage in the Global Economy’s working paper series, Department of Economics, University of Warwick.