The definition of Political Economy — as a modern scholarly discipline, a research topic, a sphere of society,  or the realm of polity — has gone through many incarnations over the years, since the phrase ‘political economy’ appeared in Antoine de Montchrétien’s Traicté de l’oeconomie politique in 1615. Four centuries later, the understanding what political economy is about still varies among academics accommodating different university departments: sociology, economics, history, political science, and international studies. The point is that these variations and shifts in grasping political economy are not merely technically semantic; in their essence — consciously or unconsciously, implicitly or explicitly — they rather reflect distinct ontological premises and epistemic presumptions about human life and the mutual embeddedness of State-Economy-Society. Therefore they largely determine and shape the research questions, empirical phenomena, methodology, theoretical frameworks, presented findings, and their analytical explanation. 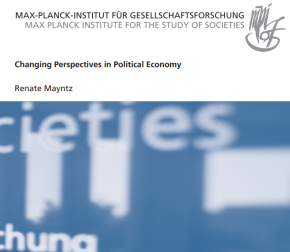 “Changing Perspectives in Political Economy” is an interesting, instructive and worth reading paper by a noted German sociologist Renate Mayntz. (See its open-access copy below). In this new work, Mayntz proficiently addresses the disputed aspects, changing facets and some conventions of political economy, and then shows how they are expressed in academic publications. The paper’s abstract reads as follows:

“The history of a research field called political economy dates back to the eighteenth century, giving rise to a variety of disciplinary approaches, and experienced a renaissance as a multidisciplinary field after the Second World War, combining economic, political science, and sociological approaches. The divergence between economic globalization and the nationally restricted scope of economic policy directs interest to the relationship between politics and the economy. A quantitative analysis of the articles published in two dedicated political economy journals shows major trends of the developing research field. The relationship between politics and economy is interpreted rather widely, and research is largely focused on Western capitalist nations. In conclusion, two avenues for further research in the field are briefly discussed”

Already for eight years, this blog plows the ground, disseminates the seeds (of knowledge) and reaps the harvest in these fields of Economic Sociology and Political Economy. As the new academic year begins, I would like to use this opportunity to thank you — each and everyone of (around) 60,000 followers and members of our community from 160 countries. We all together do this work in different plots. So invite your colleagues, students and friends to join our common cause. Spread the word and commit to change. Thank you. — Oleg Komlik
***
Mayntz, Renate. 2019. “Changing Perspectives in Political Economy.” MPIfG Discussion Paper 19/6. Max Planck Institute for the Study of Societies, Cologne
See also recent Mayntz’s book: Crisis and Control: Institutional Change in Financial Market Regulation (2012).