Friedrich Hayek – one of the protagonists and scholastic machinists of Neoliberalism, quite clearly positioned himself in regard to the following subject matter:

“No doubt an American or English “Fascist” system would greatly differ from the Italian or German models; no doubt, if the transition were effected without violence, we might expect to get a better type of leader. And, if I had to live under a Fascist system, I have no doubt that I would rather live under one run by Englishmen or Americans than under one run by anyone else. Yet all this does not mean that, judged on our present standards, our Fascist system would in the end prove so very different or much less intolerable than its prototypes.” (von Hayek, Friedrich. 2001. The Road to Serfdom. Routledge. P. 139) 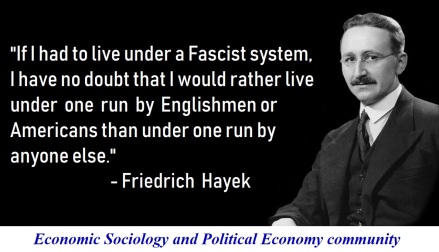