In Martin Scorsese’s film The Wolf of Wall Street the narcissistic, egotistical and money hungry investment banker Jordan Belford memorably summed up his attitude to life: “Let me tell you something. There’s no nobility in poverty. I’ve been a poor man, and I’ve been a rich man. And I choose rich every fucking time.”
Belford is terrifying not simply because of his ruthless demeanour and unscrupulous greediness. He scares us because this persona was celebrated, nurtured and encouraged by a particular economic paradigm: neoliberal capitalism. He’s a product of our own making. At the end of the film we are left wondering, how could such as monster be unleashed on society?
Jordan Belford is meant to epitomize ‘homo economicus’ — the self-interested, utility maximizing individual that is at the heart of neoclassical and mainstream economics. Of course, homo economicus is an imaginary figure, an idealization that economists assume we more or less approximate. An ‘as if’ proposition (let’s assume people act as if they are self-interested individuals) that feeds abstract econometric formula and theorems. While homo economicus has been around since the days of Adam Smith, only with the rise of Thatcher and Reagan did governments have the audacity to completely rebuild society after its image. And behavioural economics has done little to dethrone the trend. 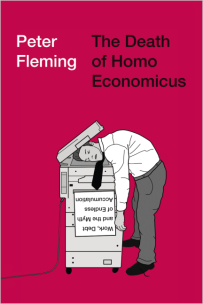 There is a problem with The Wolf of Wall Street narrative. I noticed it when I began conducting research for my new book The Death of Homo Economicus: Work, Debt and the Myth of Endless Accumulation (Pluto Press, 2017). When the myth of homo economicus was used to inspire the wholesale reform of education, the workplace, healthcare and government agencies, it wasn’t really the rich who were affected. Ironically, the wealthy tend to enjoy a more socialist and gentler surroundings, particularly the plutocracy. No, homo economicus was probably designed for those who could never live like Jordan Belford, namely, the unemployed, working poor and the middle-classes who were least likely to successfully live up to the ideals of possessive individualism.
A good example here is human capital theory developed by Gary Becker, Milton Friedman and T.W. Schultz. It assumes that people actively invest in their own earning potential through skill acquisition, training and education. But the notion has strong ideological elements too. Chicago School ministers alleged that Marxists are wrong for seeing any clash of interests between labor and capital because now everybody’s a capitalist of some sort. Moreover, human capital cannot be owed by anyone else and its benefits are only accrued by its individual possessor. Thus, why should anyone else pay for its investment, particularly the public purse?
In one foul swoop, human capital theory helped break unions since they’re irrational in this worldview. It also stigmatized public investment in education and training. Now you are on your own, and tough luck if who can’t afford a tertiary education. We can draw a direct line from neoclassical ideas like human capital theory to massive problems today facing working people such as student loan repayments, insecure contracts and low wages. Of course, the ultra-rich curiously had little interest in human capital or its cognates for this very reason.
The provocative title of my book is trying to highlight what has happened after 30 years of being water-boarded by the ideology of homo economicus. It is truly bizarre that following the 2007-2008 financial crisis the glorification of homo economicus didn’t die. Indeed, the ethos is promoted in both the public and private sectors more now than ever, driven by policy makers, politicians and captains of industry. Economic historians will be trying to figure out why for years to come.
However, what about the real people who have to live their lives according to the extreme and largely unworkable ideal of homo economicus? This is where the real tragedy of neoliberalism lies in my opinion, which is consistently swept under the carpet and seldom mentioned in the American Economic Review. In the real world, homo economicus is sick and dying off at an alarming rate. Two areas are explored in the book to back up this point.
When filtered through the lens of neoliberal capitalism, homo economicus is first and foremost a worker. She requires income to invest and consume. Hence why work is still so celebrated, even in the face of structural unemployment, a stress epidemic and the coming wave of robotics that threatens to abolish work for good. For sure, over the last 15 years a near suicidal work ethic has emerged, exacerbated by economic insecurity and mobile technology. Epidemiologists have increasingly pointed to the public health crisis that’s unfolding due to overwork and stress. It’s now up there with smoking.
Just look at the case of Moritz Erhardt. He was a 21-year-old Bank of America intern working in London. He put in an incredible 71 hours of non-stop work and died of an epileptic seizure. The tragedy raised serious questions about the killer-work ethic that is condoned in many institutions, even among the poor and unemployed. For example, I also mention another UK case of a very ill woman whom the government declared fit for work and thus ineligible for welfare payments – she died the day the letter arrived.
I also examine the issue of debt, particularly student debt. I suggest this directly stem from human capital theory and the argument that funding education is strictly a private responsibility. In the US the student loan bill stands at a breath-taking US$1.26 trillion. And the stress and anxiety caused by indebtedness is killing people. For example, Jason Yoder incurred a $100,000 debt studying at Illinois State University. He committed suicide after he failed to find a job. His mother said that even when preparing for her son’s funeral the debt collector agency constantly called about the outstanding sum.
So this book is about how an idea – homo economicus – is sadly still alive and well in theory, but in practice represents an unfolding human catastrophe that is hidden in plain sight. When I imagine homo economicus personified I don’t see The Wolf of Wall Street’s Jordan Belford. Jason Yoder is closer to the mark.
The real question at the heart of the book is this: What will replace homo economicus and what kind of economic analysis will emerge as a result?
Market individualism is basically about privatizing the economic event. Not only public assets and state organizations, but the individual productive act itself, with work as leading example. There is no way to collectively let off steam and call for progressive change. Workers fall in upon ourselves and remain mute as a result. Thus we need to vigorously revive a notion of the public good in my opinion, where economic (mis)fortunes are lived not as a private torment but openly acknowledged as a trans-individual phenomenon. Homo Politicus is thus diametrically opposed to homo economicus because s/he reverses the privatization of work and debt, viewing it as a shared problem that no individual should face alone.
This is the central message of my book, The Death of Homo Economicus.
———————
* Peter Fleming is Professor of Business and Society at Cass Business School, City, University of London. He is a columnist for the Guardian and the author of The Mythology of Work (Pluto Press, 2015).