Democracy vs. Irony, Tragedy and Pathos

Disturbing events in several countries around the world during this turbulent time sprang to my mind a sharp observation by a prominent and influential American thinker and theologian Reinhold Niebuhr:

“Man’s capacity for justice makes democracy possible; but man’s inclination to injustice makes democracy necessary. In all nondemocratic political theories the state or the ruler is invested with uncontrolled power for the sake of achieving order and unity in the community. But the pessimism which prompts and justifies this policy is not consistent; for it is not applied, as it should be, to the ruler. If men are inclined to deal unjustly with their fellows, the possession of power aggravates this inclination. That is why irresponsible and uncontrolled power is the greatest source of injustice.
The democratic techniques of a free society place checks upon the power of the ruler and administrator and thus prevent it from becoming vexatious. The perils of uncontrolled power are perennial reminders of the virtues of a democratic society; particularly if a society should become inclined to impatience with the dangers of freedom and should be tempted to choose the advantages of coerced unity at the price of freedom.
The consistent optimism of our liberal culture has prevented modern democratic societies both from gauging the perils of freedom accurately and from appreciating democracy fully as the only alternative to justice and oppression. When this optimism is not qualified to accord with the real and complex facts of human nature and history, there is always a danger that sentimentality will give way to despair and that a too consistent optimism will alternate with a too consistent pessimism.” (Niebuhr 2011: xxxii-xxxiii)

This thought-provoking excerpt is from The Children of Light and the Children of Darkness: A Vindication of Democracy and a Critique of Its Traditional Defense, published in 1944. Niebuhr has extensively written and spoken about topics in the intersection of politics, policy, social ethics and religion. His criticism of capitalism has resonated widely and in the early 1930s he organized the Fellowship of Socialist Christians. I think the ES/PE community members might find an interest in The Essential Reinhold Niebuhr, Reinhold Niebuhr: His Religious, Social, and Political Thought, and Reinhold Niebuhr and His Circle of Influence (Rice 2012). Barack Obama, by the way, called Niebuhr one of his “favorite philosophers“.
Let’s conclude this post with a passage from the last chapter of Niebuhr’s The Irony of American History. Feel free to attribute the meanings of these words to any context you find suitable.

“Irony must be distinguished as sharply from pathos as from tragedy. A pathetic situation is usually not as fully in the consciousness of those who are involved in it as a tragic one. A tragic choice is purest when it is deliberate. But pathos is constituted of essentially meaningless cross-purposes in life, of capricious confusions of fortune and painful frustrations. Pathos, as such, yields no fruit of nobility… One who is involved in a pathetic situation may be conscious of the pathos without thereby dissolving it. We can after all, pity ourselves…
An ironic situation is distinguished from a pathetic one by the fact that a person involved in it bears some responsibility for it. It is distinguished from a tragic one by the fact that the responsibility is not due to a conscious choice but to an unconscious weakness…
Elements of irony, tragedy or pathos may, of course be detected in life and history without any guiding principle of interpretation. All three types of experience are occasionally so vividly presented that they compel the observer either to the combination of pity and admiration which implies tragedy; or to the pure pity which pathos elicits; or to the laughter and understanding which are the response to irony.” (Niebuhr 2008: 166-7). 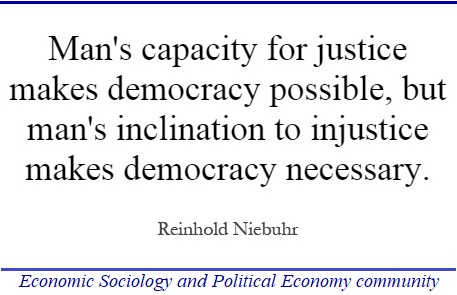