“Aftermath of a Crisis”: Manuel Castells and his colleagues tackling the crisis and its consequences 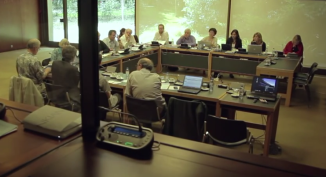 While the crisis expanded, Castells named his group ‘The Aftermath Network‘ and it become a research program on the social consequences of the crisis. The thinkers participating in the network share the idea that this crisis is not just an  economic crisis, but also a social crisis, which is bringing about a fundamental transformation of societies at large. From 2008 – 2011, the group has been convening in Lisbon to analyze the crisis as it is unfolding. The name of the group is also a reference to the new world, which according to Castells,  will emerge from the ashes of the crisis.
“Aftermath of a crisis” (2011) is an interesting documentary (directed by Bregtje van der Haak) in which the members of the network mull over the crisis, offering their bright insights on capitalism and contemporary society, characterized by growing insecurity and fear in which people are reacting both with anger and with alternative projects of hope. The movie (48 min) also hopefully argue that the new economic and social landscape is emerging from the ruins of global informational capitalism (not capitalism per se, but a particular form of capitalism) after its self-destruction. This is why it is called Aftermath, not the end of the crisis. “This is a new beginning”, stresses Manuel Castells, “The aftermath of the crisis is not only social devastation, it’s not only the political crisis, it’s not only Greece going down. It’s also an aftermath in the sense of a reconnection between society and the political system.”
““

2 Responses to “Aftermath of a Crisis”: Manuel Castells and his colleagues tackling the crisis and its consequences