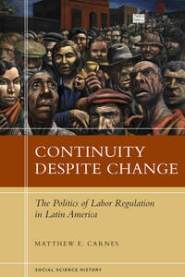 Continuity Despite Change: The Politics of Labor Regulation in Latin America shows that after three decades of economic reforms labor laws have changed far less than many expected and remained both rigidly protective and remarkably diverse. Why?
In this very interesting book (free access to the introduction), Matthew E. Carnes (Georgetown University) explains this continuity, by arguing that labor law development is constrained by long-term economic conditions and labor market institutions, especially by two key factors—the distribution of worker skill levels and the organizational capacity of workers.

Proficiently combining quantitative and qualitative methods, the research presents cross-national evidence from the eighteen major economies in Latin America to show that the theory holds for the decades from the 1980s to the 2000s, a period in which many countries grappled with proposed changes to their labor laws. Carnes develops a theoretical framework for understanding labor laws and their change through time, beginning by conceptualizing labor laws as comprehensive systems or “regimes”. Then offered theoretically grounded narratives to explain the different labor law configurations and reform paths of Argentina, Chile and Peru.
This book pushs for a rethinking of the impact of globalization on labor regulation, as economic and political institutions governing labor have proven to be more resilient than earlier studies have suggested.