The Long Divorce Between the Economy and Financial Markets

As the coronavirus spread around the world, the global economy entered a recession unprecedented in scale. The World Bank predicts a 5.2 percent economic contraction by the end of this year—the largest downturn since World War II. The current crisis is so enormous in magnitude that it has been called the Great Lockdown. Yet, the stock markets worldwide have surged at a stunning rate since the end of March and the S&P 500 jumped near 40%. The rally took place amidst widespread job loss, disrupted global supply chains, and the absence of a probable cure or vaccine for a pandemic that kills thousands of people daily.
Pundits have speculated why the current disconnect between the real economy and financial markets exists, whether it be the assurance provided by the Federal Reserve or the soundness of public corporations. But no one can deny that the widely held belief in financial markets as a reflection of the economy’s strength is mere fiction. Stock prices do not measure the value that firms can create from producing but the profits they can distribute from extracting. A shrinking economy hurts only the former and not necessarily the latter.

In our new book, Divested: Inequality in the Age of Finance, we document how the United States has been taken over by finance. We show that the rise of finance represents a paradigmatic, regressive shift in how American society organizes economic resources. In this process, financial markets have channeled tremendous resources to investors and the financial sector, divesting ordinary households and states. The divorce between the economy and financial markets did not start in 2020 but in the 1990s. While the two were loosely linked between 1950 and 1990, financial markets began to decouple from the real economy during the Clinton administration, because of financial deregulation. Shareholder value became the corporate doctrine, mass layoffs become common practice, and economic inequality soared.
The Great Recession, following the 2008 financial crisis, exposed the consequences of this finance-driven economy. While the regulatory and monetary policies did steer the US economy away from a catastrophic collapse, the recovery was slow, painful, and highly 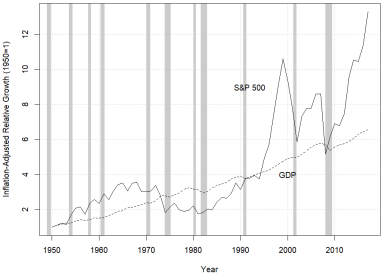 uneven. Governmental stimuli, mostly in the form of monetary policies, first went to banks and large corporations, with the belief that credit would eventually trickle down to families in need.
The “banks and corporations first” approach worked, but only rescued the financial sector. Even though the financial crisis wiped out almost three-quarters of financial sector profits, the comeback was striking. Before mid-2009, the financial sector had brought in a quarter more income than 2007. Profits continued to grow in the following years. In 2017, the sector made 80 percent more than before the crisis. Similarly, the stock market began to rebound in 2009 and fully recovered in 2013.
To be clear, what was good for the stock market did not necessarily benefit American families. More than 80 percent of the stock market is owned by only 10 percent of Americans and foreign investors. Thus, the prosperity brought about by investing in the stock market does little for middle- and working-class families. The unemployment rate was still as high as 8 percent in 2013 and the single-family mortgage delinquency continued to hover above 10 percent. By 2016, a typical American family owed 30 percent less wealth than they did in 2007.
The racial wealth gap only widened during the recovery. The median household wealth of white, black, and Hispanic households all dropped around 25 percent after the burst of the real estate bubble. But white households recovered at a much faster pace. By 2016, black households had still lost about 30 percent of their wealth, compared to 14 percent for white families.
The unequal recovery shows that using monetary policy to address economy crisis creates a clear principal-agent problem by giving money to the banks and having them serve as stewards for the rest of the economy. This was particularly evident in the ineffectiveness of quan­titative easing.
The conventional wisdom held that banks—as well as corporations and investors—knew how to put the credit into best use. And so, to pro­vide liquidity and stimulate economic growth, the Federal Reserve increased the supply of money by purchasing treasury- and mortgage-backed securities from banks. What the banks did, however, was prioritize their own interests over those of the public. They were hesitant to lend the money out to homebuyers and small businesses, since the money would then be locked into long-term loans that paid low interest. Instead, they deposited most of the funds and waited for interest rates to rise.
As the nation faces another economic crisis, it appears that loose monetary policy and finance-centered welfare are again the default remedies. The Federal Reserve took action to cut the benchmark interest rate to near zero—a policy move that does not directly support those hardest hit by the crisis. Private banks have been tasked with distributing a majority of small business loans, which brought in $10 billion in fees.
These painkillers, after all, do not cure the disease; they merely deaden the symptoms. We show in Divested that the US society has come to a turning point. Decades of economic transfer from productive to financial activities and from workers and the state to executives and shareholders has created an extremely volunerable society. Poor public health investments, crumbling infrastructure, flimsy social safety nets, and insufficient employment protection all contribute to the ongoing crisis in the United States. All these deficiencies not only put many lives at risk but also undermine the public’s confidence in the long-term prosperity of the US economy. All is made worse by a president who failed to enact a comprehensive government response to the virus, worrying that any action would scare investors.
While more urgent actions should be taken to lessen the economic impacts on American families, a new “New Deal” must be made. The coronavirus crisis shows that universal healthcare and paid sick leave are not just policies benefiting those who do not have them but also improves the safety and wellbeing of those who do. Having a more robust social safety net already in place would rescue a vulnerable population from unexpected economic turmoil. Importantly, the crisis reveals that we need to divest our resources away from financial markets and re-invest in institutions that support a prosperous society. One lesson of the on-going disaster: There is no true winner in a deeply unequal society.
————————–
* Ken-Hou Lin is Associate Professor of Sociology at the University of Texas at Austin. Megan Tobias Neely is an Assistant Professor in the Department of Organization at Copenhagen Business School and a postdoctoral researcher at Stanford University’s VMware Women’s Leadership Innovation Lab. (The emphases added by the editor.)