A Critique of the Critique of Finance: Critics of neoliberal capitalism rarely recognize the productive power of speculation

If there is one theme that unites the various critiques of contemporary finance, it is the emphasis on its speculative character. Financial growth is said to be driven not by the logic of efficient markets, but rather by irrational sentiment, “animal spirits” that do not respect fundamental values.
Emphasizing the role of volatility in contemporary capitalism (evident at the time of writing, as the stock market is experiencing a downturn) is important as an antidote to notions of market efficiency and equilibrium. But it is a mistake to think that it provides a sufficient basis for effective critique. Predictions regarding the limits or collapse of neoliberal finance have simply not enjoyed a good track record. Over and over, the contemporary financial system has proven capable of sustaining higher levels of speculative activity than anticipated. This has certainly been true of the past decade. Capital and Time: For a New Critique of Neoliberal Reason is my attempt to make sense of this—that is, to understand what might be wrong or missing in the existing heterodox critique of speculation, and to advance a more accurate understanding of the role of uncertainty, risk, and speculation in contemporary capitalism. 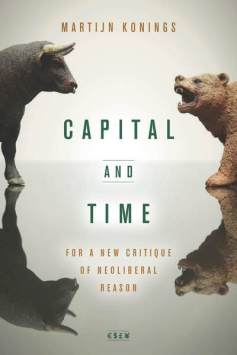