Neoliberalism has become an omnipresent term. Due its increasing pervasiveness into academic, political and media discourses, some perceive neoliberalism as an omnipotent phenomenon that explains everything, while others see it as a vague buzzword that hardly means something. Surveying this blog, for example, under the tag of ‘neoliberalism‘ one will find a very wide and diverse range of books, papers and posts dealing with a long series of topics and issues. A common denominator, though, of most of those items would be the period they cover — from the 1980s onwards. However, ‘neoliberalism’: what is it about? 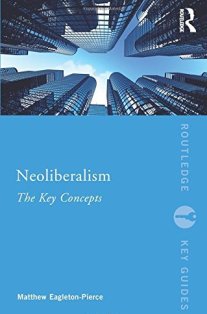 Neoliberalism: The Key Concepts, by Matthew Eagleton-Pierce (SOAS, University of London) is a timely and remarkable intellectual endeavour to quest and introduce the essence and workings of neoliberalism. But as Eagleton-Pierce emphasizes: “the purpose of this book is not to engage in defining ‘neoliberalism’… Rather, my aim is to explore and interrogate a range of histories, meanings and practices that cluster around this pervasive label” (p. xiii).
Eagleton-Pierce’s important project provides a critical guide to a vocabulary that has become globally dominant over the past thirty years. The language of neoliberalism both constructs and expresses a particular vision of politics, economy, society and everyday life. Despite the popularity and diffusion — or probably because of them — the concepts used by neoliberalism or associated with it often remain confusing, since they are the product of contested narratives. Moreover, the neoliberal lexicon often conceals and obscures  rather than elucidates and clarifies. In this book, Eagleton-Pierce does an excellent job in decoding it.
In a very accessible way, demonstrating a profound competence with a comprehensive interdisciplinary body of knowledge, the book analytically depicts and dissects 44 key terms of neoliberalism, such as: Adjustment, Competition, Entrepreneurship, Flexibility, Freedom, Global, Growth, Market, Stakeholder, State, Trade, Welfare, and more.
One of notable merits of the book is the enriching of the arguments in regards to neoliberal ideas, institutions and practices proposed by various scholarships. But at the same time, applying an eclectic approach, the book masterly avoids the traps of simplicity or over-complication. The result is a well-crafted and insightful resource that elegantly encompasses many intellectual voices, themes, and schools of thought, presenting cross-references and an extensive bibliography for further enquiries.
Students, researchers and everyone who are puzzled by the common words associated with neoliberalism and interested in understanding the socio-political dynamics and morphology of the neoliberal economy and economics will certainly find Neoliberalism: The Key Concepts a valuable and beneficial study. This recommended volume is structured as a list of discrete entries, but it easily could be read as a complementary narrative; a proficient account offering an exploration of the multifaceted relationship between language, logics and the mutually embedded State-Economy-Society.

Open access to the table of contents and the introductory chapter.