Neoliberalism and the political economy of corporate governance

Major corporate frauds and scandals since the early 2000s (e.g. WorldcCom, Enron, Arthur Andersen, Bear Stearns, Lehman Brothers) and the 2008 financial crisis have not just exposed the inherent destructiveness of the neoliberal economy and economics, but also turned the crucially important spotlight towards corporate governance, a set of practices and regulations as well as an academic field of study. 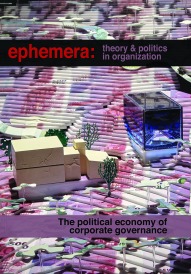 The recent issue of Ephemera – Theory and Politics in Organization is devoted to the theme of “The political economy of corporate governance” (open access). This interesting special issue, edited by Andreas Jansson, Ulf Larsson-Olaison, Jeroen Veldman and Armin Beverungen, brings together a number of illuminating contributions that undertake the topic of corporate governance in a broader socio-economic context to understand the purpose of corporations, their interests, codifications and effects, in the shadow of neoliberalism and in the light of the transformations of  the 20th century corporation. The departing point of this issue, as the editors articulated, is that corporate governance “is a political-ideological project based on a set of questionable conceptual and empirical assumptions, which in turn entail a set of norms and prescriptions – a normativity – with devastating political-economic effects”.
The issue consists of three strands of research. A first strand of research has focused on the distributive effects of the orientation towards shareholder primacy, suggesting how this has led to more inequality and poorer working conditions for those outside of top management circles. The second strand suggests a more complex story concerning the diffusion and dominance of new ideas in corporate governance, involving issues such as globalization, academic idea production and rhetoric, power, elites, resistance, and local adaptation. This kind of research questions the usual functionalist story purporting to explain the diffusion of good governance and shareholder value ideas – i.e. that these ideas simply are better and more competitive than the alternatives and therefore come to reign supreme. A third strand of research dissects the conceptualization of the corporate form propagated by agency theory, and the departure point of shareholder value as the ultimate goal of corporations. This line of research shows how this conception is plagued with both inconsistencies and false assumptions.
Understanding corporate governance under shareholder capitalism is necessary in order to take another path, where social wellbeing and economic prosperity for all working people have not been sacrificed for the benefit of the wealthy elites. This special issue is a significant step in this direction.