In a highly influential book Situating the Self: Gender, Community and Postmodernism in Contemporary Ethics, a distinguished Yale philosopher Seyla Benhabib argued that:

“Moral judgment is what we ‘always already’ exercise in virtue of being immersed in a network of human relationships that constitute our life together. Whereas there can be reasonable debate about whether or not to exercise juridical, military, therapeutic, aesthetic or even political judgment, in the case of moral judgment this option is not there. The domain of the moral is so deeply enmeshed with those interactions that constitute our lifeworld that to withdraw from moral judgment is tantamount to ceasing to interact, to talk and act in the human community.” (1992: 125-6)

This assertion sprang to my mind while I was reading “Moral categories in the financial crisis“, a discussion forum composed from the short interesting papers by Marion Fourcade, Wolfgang Streeck, Philippe Steiner and Cornelia Woll. I was puzzled: how can we reconcile this cogent assertion with the neoliberal intentional shots and detrimental consequences of the financialization of the economy? Or perhaps this very argument offers a profound answer pointing out to several measures and dimensions of the contemporary socio-political realities?
From various perspectives, Karl Polanyi, Max Weber and Karl Marx have argued that economisation and market fundamentalism undermine the moral fabric of societies. Following them, “Moral categories in the financial crisis” instructive symposium calls to recognize the relevance of moral judgments when examining economic institutions and processes. Its focused goal is to analyze different ways in which moral categories have been mobilized in the 2007-9 financial and Eurozone crises.
Firstly, Philippe Steiner analyzes the reconfiguration of the ‘moral economy’ surrounding income inequalities in the shadow of colossal executive pay; Cornelia Woll’s account of bank bailouts underlines the dilemma between the collective problem of systemic risk and the individual one of moral hazard; Wolfgang Streeck then presents a indictment of the European Commission and financial elites in his interpretation of the unfolding of the “Greek crisis”; and finally Marion Fourcade scrutinizes the cultural and political consequences of the economic morality plays being enacted in the corridors of power in Brussels and Washington.
The recent crises opened widely the black box of neoliberal policy-making, unethical behavior of economists and the (dys)functioning of financial markets. In turn, these turbulent ongoing events urge us to open the “black box of morality” (Fourcade and Healy 2007: 305) of markets and capital accumulation, and to develop, what I would call, sociology of economic (im)morality. This intellectual mission is an essential part of understanding the ontological axiom of the mutual embeddedness of State-Economy-Society. This intellectual mission is crucial for planting the seeds for more, in C. Wright Mills’ eloquent terms, moral sensibility in societies and economies.

“In a society in which the money-maker has had no serious rival for repute and honor, the word ‘practical’ comes to mean useful for private gain, and ‘common sense,’ the sense to get ahead financially. The pursuit of the moneyed life is the commanding value, in relation to which the influence of other values has declined, so men easily become morally ruthless in the pursuit of easy money and fast estate-building…
A society that is in its higher circles and on its middle levels widely believed to be a network of smart rackets does not produce men with an inner moral sense; a society that is merely expedient does not produce men of conscience. A society that narrows the meaning of ‘success’ to the big money and in its terms condemns failure as the chief vice, raising money to the plane of absolute value, will produce the sharp operator and the shady deal. Blessed are the cynical, for only they have what it takes to succeed.” (C.Wright Mills 1956)

The time has come to develop Sociology of Economic Immorality. 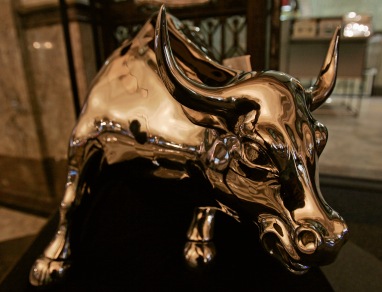 A bronze sculpture of the New York Stock Exchange Bull at the Museum of American Finance in New York October 2, 2008. REUTERS/Shannon Stapleton