Community Capitalism in China: the State, the Market, and Collectivism

“Planning and market forces are not the essential difference between socialism and capitalism. A planned economy is not the definition of socialism, because there is planning under capitalism; the market economy happens under socialism, too. Planning and market forces are both ways of controlling economic activity.” (Deng Xiaoping, the former leader of the People’s Republic of China, 1992)

In its very essence, Economic Sociology rejects the artificial dichotomous  view of the state and the ‘market’; in the contrary it stresses their mutual embeddedness. Community Capitalism in China: The State, the Market, and Collectivism by Xiaoshuo Hou (St. Lawrence University) is an additional important contribution to empirical validation and theoretical fortification of this ontological fact. Following the same conceptual line, Hou goes further and proposes to end the dichotomous view of capitalism and communism. 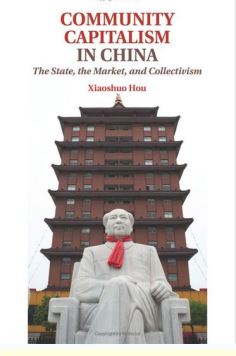 Based on extensive fieldwork in three Chinese villages, the author of this interesting book shows that community is both the unit of redistribution and the entity that mobilizes resources to compete in the market; and collectivism creates the boundary that sets the community apart from the outside and justifies and sustains the model. Community capitalism, argues Hou, differs from Mao-era collectivism, when individual interests were buried in the name of collective interests and market competition was not a concern. Community capitalism also deviates from cooperatives such as Israeli kibbutzim in that there are obvious hierarchies in the community and people pursue the accumulation of wealth and modern conveniences.
Nonetheless, examining the institutional innovation in the villages this erudite, rich and engaging book demonstrates the embeddedness of the ‘market’ in community, showing how social networks (guanxi in Chinese), local context, group solidarity, power, honor and values play an important role in these villages’ social and economic organization.
(Open access to the first chapter)
See more entries on features of Chinese political-economic regime here.