Due to enduring civil, student-led protests, Chile to have free higher education. This is a huge victory to grassroots activism and social movements. 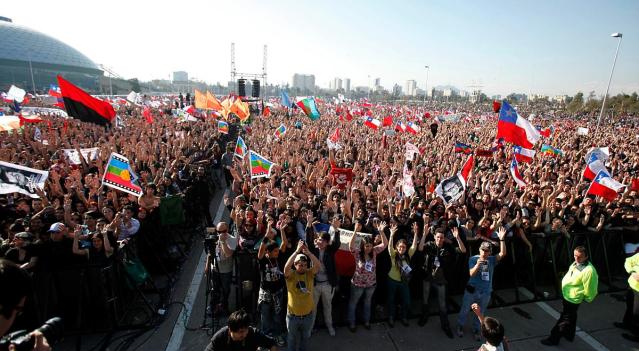 The ‘Chilean Winter’ started in August 2011. A series of ongoing student-led protests across Chile have been sweeping throughout the country, demanding a new framework for education, more equality in access to education, more direct state participation in secondary education and an end to private profit-making in higher education. ‪Chile‬, the cradle of ‪Neoliberalism‬, has the most privatised and segregated education among the OECD countries. Beyond the specific demands regarding education, the protests have reflected a deep discontent with Chile’s high level of ‪‎inequality‬.
The Socialist Party’s Michelle Bachelet won presidential elections last year, defeating the center-right government, in part by promising to implement many of the students movement’s demands. But the popularity of Bachelet’s government had dropped amid heavy criticism of the‪ ‎education‬ reform while a new wave of students protests and demonstrations spreading through the country.

These persistent and enduring actions of grassroots activism and social movements eventually made significant progress and succeeded! A few days ago it was announced that university education in Chile will be free by 2016. It’s not yet clear how this will affect the fully private universities (in which many Chilean MPs are shareholders) or the huge volume of student debt. But the essential victory was certainly achieved.
This victory belongs to the first generation “without fear”; those young women and men that not have had any personal experience with Pinochet’s authoritarian regime, having been born around the time of the democratic transition; the generation with a strong political and social consciousness, which embodies a powerful belief that change is possible.
(Please share this inspiring news)

2 Responses to Inspiring Victory of Grassroots Activism: Chile to Have Free Higher Education