Sociology Journals and Network Proprieties of the Matthew Effect

Science is a political field. As Bourdieu peremptorily said “the scientific field is the locus of a competitive struggle, in which the specific issue at stake is the monopoly of scientific authority” (1975: 19).
Shifting a little the focus, sociologist Robert Merton tackled in his seminal Science article (1968) the issue of how this authority is acquired looking at the “ways in which certain psychosocial processes affect the allocation of rewards to scientists for their contributions” (p 56). These processes are not only crucial for the ways ideas and findings spread in the scientific community, but are also the product of individual and structural characteristics of the system in which scientific practices are embedded in. The main point in Merton’s article was showing that a basic mechanism through which scientists acquire credits for their work depends on the class system “based on differential life-chances which locates scientists in differing positions within the opportunity structure of science” (p. 57). This is the Matthew effect, for which “eminent scientists get disproportionately great credit for their contributions” (p. 57).
Using bibliometrics data, I have explored one of the possible ways in which this phenomenon unfolds, looking at the citation patterns that sociological journals followed in 2017.
Table 1 shows the 26 journals, selected among those common in three web archives (Scimago, Scopus and Incites), that constitute the nodes in the network. The edges could be conceptualized as the number of times in 2017 journal A has cited an article published in journal B in all the possible years in which journal B could have published an article. Nodes have different weights, computed as linear sum of the indicators used to quantify the impact of a journal (this choice is due to the intrinsic limits of the Impact Factor (IF), as presented by Larivière and Sugimoto (2018), but also due to the consideration that these metrics measure different aspects of a journal), and edges have different sizes (according to the number of times each journal cites the others). 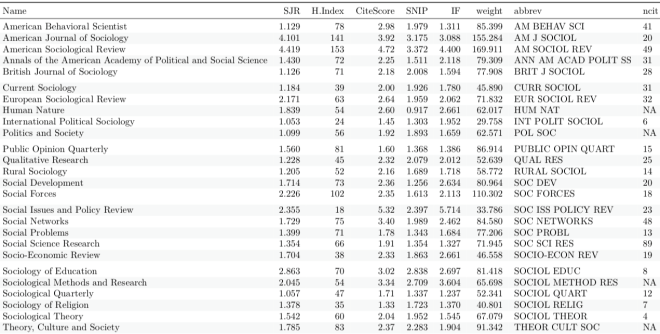 Looking at the characteristics of this network at the nodes level, three concepts are particularly important: degree, betweenness, and eigen centrality. Overall, most of the nodes have a degree centrality above 20 (on a scale up to 35), which means that journals often have links with many other journals; secondly, those in the very center of the graph, with a higher degree centrality and hence more connected with the overall network, are in general those journals with a higher impact.
Another important nodes’ feature is betweenness centrality, which indicates on how many paths between other nodes each node is positioned (measuring how much information they are able to gather). One journal in particular, Social Science Research, places itself in between a great variety of patterns. This means that publishing in that journal allows the authors to be in between other journals’ patterns, both in terms of citing, they cite more often other journals, and in terms of being cited, this journal is cited by a more diverse set of journals. The rest of the network is consistently at the edge, indicating a low overall level of betweenness centrality. Figure 1 shows the distribution of journals in terms of betweenness centrality.

Figure 1: Betweenness Centrality. The more yellow the node, the higher the weight; the closer the node to the center, the higher its betweenness centrality (i.e. advantage in acquiring information).

To have an idea about the journals’ prestige also in terms of citations (and not only weights), the concept of eigencentrality is particularly helpful. It describes the degree of centrality of each node, taking into account the centrality of their neighbors. In this network, the most important journals in terms of weight have also a better position in terms of visibility. In fact, the nodes at the center of the graph are mostly light and closer to the yellow part (indicating a higher weight). This is shown in Figure 2. 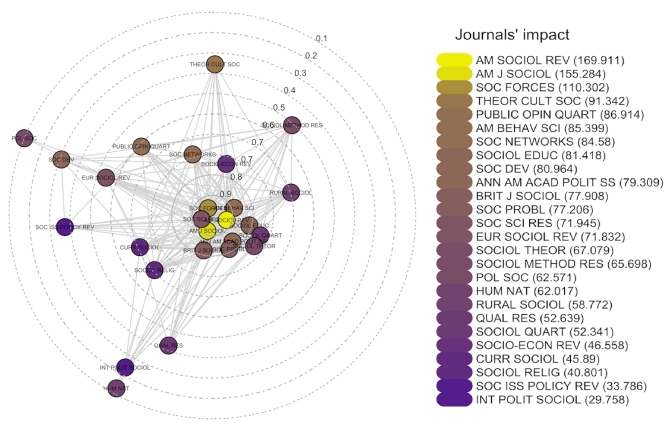 Figure 2: Eigencentrality. The more yellow the node, the higher the weight; the closer the node to the center, the higher its eigenvector centrality (i.e. the more central neighbors that node has).

Because this is a direct network, it is important to evaluate which ties are better able to spread the information around the network, for which two measures are particularly explicative, authority and hub. An authority is a node with many other nodes linking to it, and Figure 3 shows the distribution of authorities in this graph as nodes’ size. As shown for the nodes, most of the authorities are high-ranking journals.

The second concept, that of hub, refers to the ability of one node to pointing to many authorities, allowing in this way a trustworthy selection of the information it transmits. Translating this concept from the information theory to citation patterns, good hubs are journals that cite other journals considered as good authorities due to the impact of their works. Figure 4 shows that good authorities are also good hubs. American Sociological Review, American Journal of Sociology, Social Forces, American Behavioral Scientist, Social Science Research are among the most impactful journals, and always among the top authorities and top hubs. 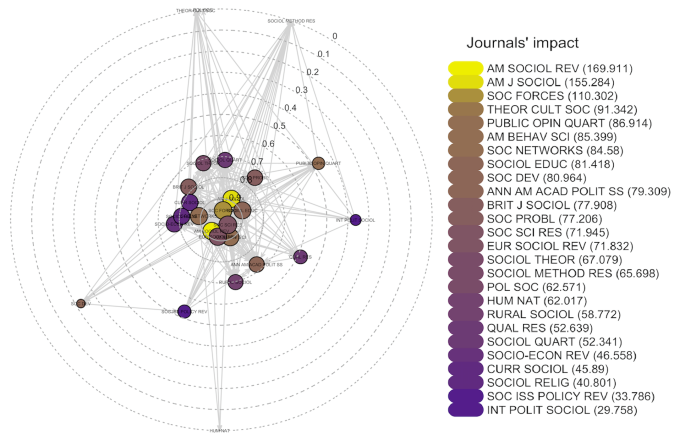 Figure 4: Hubs. The bigger the node, the larger the number of citations to authorities; the thicker the link, the higher the n° of citations

An interesting fact emerges when the authority and hub graphs are compared. One journal, in particular, pays a high wage in being in this network, namely European Sociological Reiview. In 2017 it has received 0 citations from the other journals (indeed it is at the outskirt of the authorities’ network), but it figures among the strongest hubs. This means that not only high-ranking journals constitute an impermeable clique, but they are also supported by other journals which do not gain nothing in exchange.
Borrowing from recent works on web dynamics on social networks such as Facebook, these results could suggest the existence of an echo-chamber effect, where certain kind of information continuously circulate within close circles. And this effect could be conceived as one instance in which the Matthew Effect continuously reproduce itself.
Additional hints in this direction are provided looking at the whole network. Figure 4 shows the cliques in the network. This concept indicates particular subgroups in the network in which nodes cite each other more often than with other nodes. Three major cliques for this network are detected, mostly overlapping except for two nodes in each clique. To have a view of which journals belong to which cliques, Figure 5 shows two of the three major cliques. From this plot, it could be assessed that most of the high ranked journals (American Sociological Review, American Journal of Sociology, Social Forces, American Behavioral Scientist, Social Network, Sociology of Education) belong to both the cliques, indicating once more some evidence of an echo-chamber effect.

These analyses have depicted a fairly well connected network of journals in the field of sociology, with some evidence that more impactful journals maintain their weight also because information resonate within circles of mutual reinforcement (echo-chamber effect). This study, though, addresses the topic of the rewarding system using a single year of reference. Dynamic networks should be employed to further deepen the struggles intrinsic to the political field of science.
—————————
* Luca Carbone is Research Master student in Sociology at Tilburg University, NL. His research interests lie at the intersection between historical and cultural sociology, employing social network analysis, archival research, and scientometrics tools to study the many facets with which science and society bicker.