Are we the 99%? The Corporatization of Activism and Cooptation of Social Protests

Mass struggles and civil unrest have raged since the 2008 financial crisis. Across the world students, workers and environmentalists are taking to the streets fighting for social justice and against neoliberal austerity or state repressions. 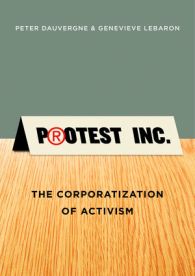 Protest Inc.: The Corporatization of Activism by Peter Dauvergne and Genevieve LeBaron, aims at shedding light on the less known angle of the global activism. As millions of citizens rally against capitalism, activism more broadly is increasingly mirroring businesses’ aspirations and echoing calls for market-based solutions. The authors are interested in how widespread current grassroots movements have become captured in the very structures and discourses they originally sought to combat.
For example, the past decade has seen nongovernmental organizations partner with oil companies like ExxonMobil, discount retailers like Walmart, fast-food chains like McDonald’s, and brand manufacturers like Nike and Coca-Cola. NGOs are courting billionaire philanthropists, branding causes, and turning to consumers as wellsprings of reform. An increasing number of corporate executives are given seats in NGOs boards.
This hard-hitting, original and important book argues that political and socioeconomic changes are enhancing the power of business to corporatize activism, including a worldwide crackdown on dissent, a strengthening of consumerism, a privatization of daily life, and a shifting of activism into business-style institutions. Even as protestors march and occupy cities, more and more activist organizations are collaborating with business and advocating for corporate-friendly “solutions”.
“[L]ooking in the cold light of day at actual outcomes,” Dauvergne and Lebaron write, “it is clear that corporatized activism today is doing far more to uphold the world order than mass protests and grassroots activism are doing to transform it” (p. 137). In this – one might say gloomy and debatable – book, they pose a serious question: do we want NGOs and social movements working with corporations to pressurize them into changing their values and practices, or should these groups retain a critical independence? The authors argue in favour of the latter and provide a resonant wake-up call about the creeping de-radicalizing influence of big business and corporate power on civil and social activism.

This entry was posted in Books and tagged activism, corporations, neoliberalism, social movements. Bookmark the permalink.