Free trade politics, the power of ideas and political economy of European integration

“The bourgeoisie… has resolved personal worth into exchange value, and in place of the numberless indefeasible chartered freedoms, has set up that single, unconscionable freedom—Free Trade. In one word, for exploitation, veiled by religious and political illusions, it has substituted naked, shameless, direct, brutal exploitation… The need of a constantly expanding market for its products chases the bourgeoisie over the entire surface of the globe. It must nestle everywhere, settle everywhere, establish connexions everywhere” (Karl Marx)

In 2001 the World Trade Organization launched the Doha Round – the multilateral round of talks among its members which aimed to achieve major reform of the international trading system through the introduction of lower trade barriers and revised trade rules. But with the stagnation of the Doha Round, trade liberalisation is increasingly undertaken through bilateral free trade agreements. 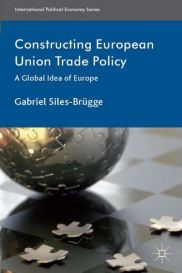 In this very interesting book Constructing European Union Trade Policy: A Global Idea of Europe, Gabriel Siles-Brügge (University of Manchester) competently examines, combining theoretical rigour and deep empirical research, the EU’s decision to negotiate such agreements with emerging economies, following the 2006 ‘Global Europe’ strategy. Eschewing materialist, critical and rationalist explanations, Siles-Brügge develops a novel constructivist argument to highlight the role of language and ideas in shaping EU trade policy and focuses on the role of particular agents. Drawing on extensive interviews and documentary analysis and through detailed case studies, Siles-Brügge shows how EU trade policymakers have privileged the interests of exporters to the detriment of import-competing groups, creating an ideational imperative for market-opening. Even during the on-going economic crisis the overriding mantra has been that the EU’s future well-being depends on its ability to compete in global markets. The increasingly neoliberal orientation of EU trade policy has also had important consequences for its economic diplomacy with the developing economies of the African, Caribbean and Pacific group of states.
This lucid and important book sheds light on the power of ideas in building and promoting of Neoliberalism. Scholars and students of  international political economy and economic sociology will greatly intellectually benefit from this insightful research.
(Open access to the first chapter and index)