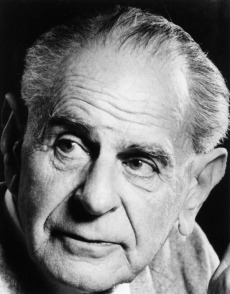 “We [need to] distinguish between a true rationalism and a false or a pseudo-rationalism. What I shall call the ‘true rationalism’ is the rationalism of Socrates. It is the awareness of one’s limitations, the intellectual modesty of those who know how often they err, and how much they depend on others even for this knowledge. It is the realization that we must not expect too much from reason; that argument rarely settles a question, although it is the only means for learning—not to see clearly, but to see more clearly than before.
What I shall call ‘pseudo-rationalism’ is the intellectual intuitionism of Plato. It is the immodest belief in one’s superior intellectual gifts, the claim to be initiated, to know with certainty, and with authority. According to Plato, opinion—even ‘true opinion’, as we can read in the Timaeus —’ is shared by all men; but reason’ (or ‘intellectual intuition’) ‘is shared only by the gods, and by very few men’.
This authoritarian intellectualism, this belief in the possession of an infallible instrument of discovery, or an infallible method, this failure to distinguish between a man’s intellectual powers and his indebtedness to others for all he can possibly know or understand, this pseudo-rationalism is often called ‘rationalism’, but it is diametrically opposed to what we call by this name.”