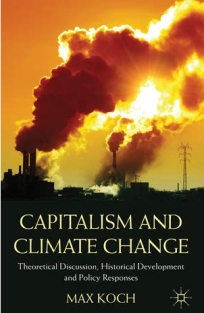 The scientific consensus on clime change is clear-cut. Max Koch (Lund University) wrote a pathbreaking book looking at climate change as a social issue and analysing its development in parallel with capitalism. By integrating political economy and environmental economics, Capitalism and Climate Change: Theoretical Discussion, Historical Development and Policy Responses examines the incompatibility of the imperatives of capitalist development and the physical limits of the earth. The regulation approach is used to make an empirical analysis of the links between accumulation regimes, modes of consumption, energy politics and climate change during the two periods of perceived economic growth — Fordist and Neoliberal.
As Koch states, the origins and development of global warming relates directly to “the upswing and generalisation of the Fordist production and consumption norm in the Western world and of the simultaneous establishment of an international division of labour in industrialised and extraction societies” (p. 83). While Fordist capitalism depended on the consumption of massive quantities of fossil fuels, so too does the succeeding finance-driven form of capitalism. At the end,  the book also assesses the potential of the global governance network for dealing with climate change. Koch underscores that huge global inequalities and power asymmetries are major obstacles in negotiations on climate change. Dealing in detail with carbon-trading  schemes, Koch shows why such free-market instruments to climate change have proved inefficient.
Capitalism and Climate Change is a theoretically sophisticated, empirically rich and well-structured book that covers an impressive range of topics in a clear and highly convincing manner. Along with some new books on the inherent negative socio-environmental impacts of capitalism (John Urry’s excellent Climate Change and Society, and Magdoff and Foster’s instructive What Every Environmentalist Needs to Know about Capitalism), Koch’s research is essential for anyone wanting to better understand the challenges we all face. Then we ought to decide: to stay aside or take action.